Bernadette Conroy, Chair of Network Homes, has been named a winner at the Non-Executive Director Awards in the Not-for-profit/Public Service Organisation category.

She was praised by the judges for her strong sense of social purpose and giving back at the ceremony which was held on Saturday 14 March. 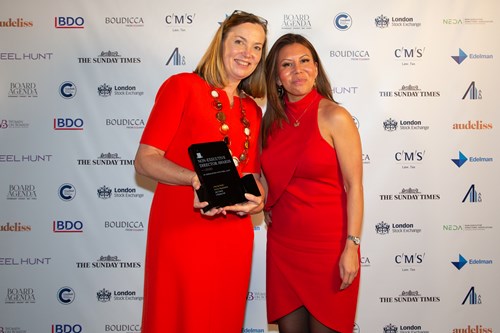 Bernadette became chair in 2016 and under her direction, Network Homes has consistently punched above its weight, establishing itself as a key developer and strategic partner within the private and not for profit sectors. Its successes include obtaining a credit rating and achieving a £175m Private Placement from North American investors; becoming a strategic partner of the Greater London Authority and achieving trusted status from the Social Housing Regulator; and maintaining strong financial results in an uncertain market, making a net surplus of £72m at during 2018/19.

The Non-Executive Director Awards, now in their 14th year, are run by the stockbroker Peel Hunt with support from the Sunday Times newspaper. They recognise the achievements of non-executive directors within the business and not-for-profit/public sectors with an aim of bringing clarity, transparency and awareness to what excellence looks like.

I’m very honoured to have received this award and I would like to pay tribute to the amazing Board, leadership team and staff we have at Network Homes. While I feel immensely proud of winning on an individual level, such success is down to the strength of the team. I’d like to thank everyone for making this possible.

Helen Evans, chief executive of Network Homes, said: “The past few years have seen unprecedented challenges for housing associations from the impact of the Grenfell tragedy, to Brexit and an unpredictable political environment, yet Network Homes has gone from strength to strength under Bernadette’s leadership.”