An apprenticeship scheme run by Network Homes has given a Wembley resident the keys to a successful housing career as he lands a full-time job.

Jonathan Bussette is now literally giving the keys to prospective tenants thanks to his new role of Voids and Lettings Administrator at the Wembley based housing association. Chuffed Jonathan ‘loves’ his new job and has praised the apprenticeship scheme for giving him the skills to ‘get on’. 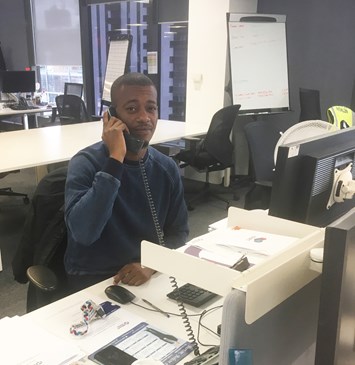 Jonathan, 33, who previously worked at a gas and electricity supplier where he felt there was little progression, kicked off his apprenticeship in September 2018. He spent time in various departments across the organisation and was given first-hand experience of listening to customer queries and providing a solution to problems such as anti-social behaviour cases and parking complaints. He also visited tenants when they had disputes with their neighbours in an effort to resolve their issues.

The apprenticeship also gave Jonathan the chance to earn while he learned as he combined work with study and course work. It also came with qualification in CIH Level 2 Certificate in Housing Practice.

Jonathan said: “I really love my new position, especially seeing people receive the keys to a home of their own.

“My apprenticeship has helped me learn about all the different aspects about working in housing along with the skills needed to provide excellent customer service. It also built up my personal confidence so that I really enjoying speaking to different people every day, something which I continue to do in my new role.

“My advice to the new apprentices is work really hard, develop a positive attitude and you will go far.”

As one apprentice moves into a full-time role, four more are due to kick start their careers at Network Homes in October. The roles aren’t just in housing management as there are opportunities in human resources, development and business management.

A Network Homes Apprenticeship is a fantastic gateway into a new career and offers the opportunity to work and learn at the same time. I’m really thrilled for Jonathan in his new role as he has shown true commitment and hard work throughout his apprenticeship.

You can view the full interview with Jonathan here.