At the same time, almost the same number of households in social housing are living in homes that are too large for their needs. Under-occupation has fallen in recent decades, but still stands at 8.5%, or 336,000 households.

There are different definitions of overcrowding and under-occupation. These figures use a definition which sets a high threshold for being over-crowded. A household in which two adults share one room, two teenagers of the same gender share another, and two children under 10 share another, would not count as overcrowded on this definition. 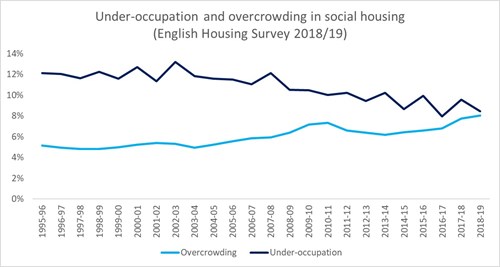 Similarly, the definition requires under-occupiers to have at least two spare bedrooms. On a less strict understanding of these terms, overcrowding and under-occupation are much more prevalent than these figures show.

Overcrowding happens when households grow but can’t move into a larger home. The main reason overcrowded households struggle to move is simply that there are not enough large homes available for them.

Of course, there are not enough homes available in social housing in general, regardless of size. In 2018/19, there were 314,000 lettings in social housing. But there were more than three times as many households on the housing waiting list – 1.16 million.

In fact, demand exceeds supply to a much greater extent for larger homes than smaller ones. This is clear if we look more closely at the waiting list and lettings figures in relation to different home sizes. One thing we can ask is how many households were waiting for a home of a given size, for every home of that size that was let.

For every four-or-more-bed home let, there were 14 households waiting for a home of that size. This is much higher than for any other home size.

In Westminster, the situation is much worse, and the difference much starker:

Demand for large homes is in fact likely to be even higher than these figures suggest, because not everyone who would benefit from a larger home makes it onto the housing waiting list (which can involve quite strict criteria).

The problem is also exacerbated by the very low turnover rate in social housing, with residents on average staying in their homes for 50 years.

Clearly, while we need more homes in general, we especially need more large homes. The trouble is that these are the most expensive homes to build, and it does not look like housing associations will receive the funding they need to build more large rented homes any time soon.

But there is another solution. Remember the 336,000 under-occupiers in social housing. If more of these households moved into smaller homes (which are not as scarce as large ones), they would free up the larger homes that are so desperately needed. That’s why tackling under-occupation matters, and why Network’s Research and Policy Team are currently developing new policies and procedures to reduce under-occupation.