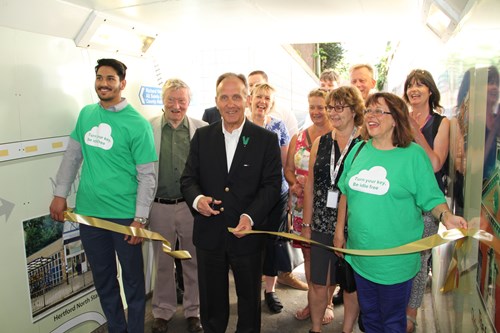 All Saints Church subway in Hertford has been given an impressive makeover using a collection of photographs taken by members of the Hertford and Ware Police Cadets. The subway, with the new art installation, was officially opened by Cllr Bob Deering with Cllr Peter Ruffles, Network Homes, East Herts Council and Herts County Council on 15 June in support of Clean Air Day 2017.

Network Homes, who provided funding for the project with the Department of Transport, worked in partnership with Herts County Council and East Herts Council to improve this local space. The main aim was to have the subway reflect aspects of the local community while bringing across the theme of ‘greater access to transport’.  The works were then carried out by Community Clean, Hertfordshire’s Highways Department and Ringway.

The Hertford and Ware Police Cadets creatively captured local attractions and landmarks across North Hertford and East Hertford. The photographs were artistically combined with historical snapshots along the same route showing a nice display of what the area looked like before and how it is now seen through the eye of young people.

Jackie Trundell, Head of Neighbourhood Services at Network Homes, said: “The subway has been wonderfully transformed thanks to the police cadets’ creativity and imagination. It is now a pleasant and safe access route for everyone to use. We’ve enjoyed working in partnership on this project and look forward to working together again to make further improvements to the area for residents in the local community.”

Police Cadets volunteer coordinator Bob Cox said: “The cadets were keen to get involved in the project and are pleased to have been able to support this initiative to help raise awareness of how we can all do our bit to help improve our environment.”

Ralph Sangster, Hertfordshire County Council’s Cabinet Member for Highways, said: “This subway has been transformed, making the route in and out of Hertford far more pleasant for pedestrians.”