Fiona gets inspired to begin a career in estate regeneration 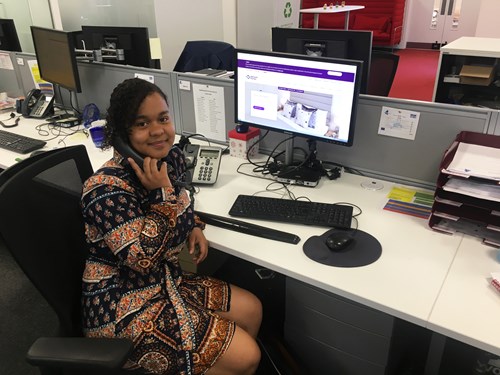 The University College London (UCL) student, who is in her third year studying Planning Design and Management, spent two weeks with the Regeneration Team in July. The team is working on three large regeneration projects across London and Hertfordshire.

While volunteering with a youth project run by SW9 Community Housing, a subsidiary of Network which manages Stockwell Park Estate, Fiona attended a CV workshop where she mentioned her interest in regeneration. She was urged to contact Network’s Regeneration manager Tim Goodwin who arranged work experience with his team.

Fiona said: “On my placement Tim gave me an insight on what he and his team do and the projects he carries out. He explained what you need to take into consideration when you plan a regeneration scheme, the way it develops and the important people involved in the process. Over the two weeks we visited Network’s regeneration sites at Rectory Park, Ealing, Ridgeway, Hertford, and Stockwell Park. We went to various meetings, met councillors, spoke to contractors. It was good to see how everyone came together, to discuss what’s been done already and what’s being planned.

“Tim also gave me lots of information and documents to read through. In one of my university modules next year I’ll be asked to create a regeneration masterplan so he explained to me how you do this

The work placement has definitely boosted my opportunities for when I graduate. One of the most important things is building contacts as having good contacts can get you far in life. I can’t express how helpful Tim Goodwin was.

Since her placement, Fiona has been offered a temporary paid receptionist role at SW9 which is something else to add to her CV.

After graduating Fiona is keeping her career options going. Her long term goal is to go back to Angola where her parents are from to help transform homes and infrastructure there.

“I’d like to build up my experience in regeneration or planning in the UK first then perhaps move to Dubai to work on projects there. Eventually I’d love go back to Angola where my parents come from. I feel I could be more use to people there, transferring the knowledge I’ve learnt here to make it a better place.”

Tim Goodwin said: “Fiona was an absolute delight throughout her placement. Always on time or early, very quick picking up things, interested in the projects we looked at, and immediately building up a rapport with everybody she met.”