BLOG: Why affordable rents are so important - By Killian Faith-Kelly

Working for a housing association can be difficult to explain. We’re not what most people think of as a charity, but we don’t make a profit. We have a charitable purpose, but the service we provide isn’t free. Sometimes it’s really quite expensive. We also sell properties on the open market, owe almost a billion pounds to banks and other financial institutions and record surpluses of tens of millions of pounds every year.

The bottom line is that our primary purpose has always been, and will always continue to be, the provision of housing that anyone can afford, regardless of income. Setting and keeping rents low enough to do this has become a complex problem, and our upcoming report on rents explains this issue and how to solve it. In this piece though, I want to explain some figures that show why affordable rents are important. 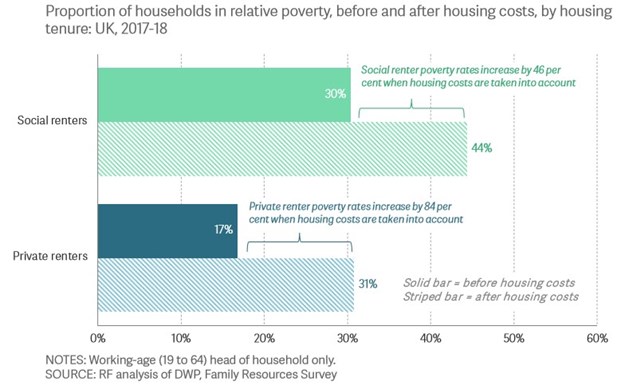 The table opposite, from a report written by The Resolution Foundation (a thinktank) and Clarion (the UK’s largest housing association) shows the effect that the cost of someone’s housing has on their vulnerability to relative poverty (a situation where a household’s income is 60% or less of what the national median income is, meaning they are economically excluded from enjoying an average standard of living). 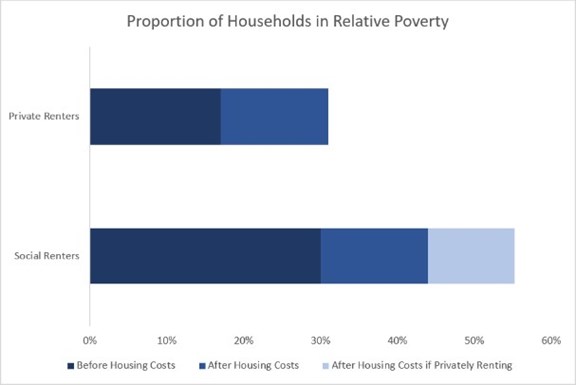 Another way to think about this is to imagine that the social renters represented in the graph above had to privately rent instead. This is shown in the graph opposite.

We can see here that if the same proportion of social renters were moved into relative poverty by their housing costs as currently happens in the private rental market, then over half of current social renters, 55.2%, would be living in relative poverty. In reality, this number would actually be even higher, because the lower average income of a social renter means they would be affected more by the high cost of housing in the private rental market than current private renters, who on average have a higher income and are therefore protected more from the impact of these costs.

Even using this conservative estimate however, social housing has allowed 11.2% fewer of its tenants to live in relative poverty. That might not seem like a huge number, but when you consider that there are approximately 5 million homes in the social sector in the UK, that’s 560,000 fewer households in relative poverty than there would be without social housing. That’s 560,000 more households that have access to the average standard of living. For people who work in social housing, that’s why we do what we do.

More on our research