BLOG: Awards for the continuing transformation of a Hertford neighbourhood

On Tuesday 19 October we unveiled plaques to commemorate awards for ‘Best New Building’ from the Herford Civic Society (HCS) for two projects at Sele Farm: a £34 million regeneration scheme providing new homes at the Ridgeway (2020); and an older persons scheme, Calton Court (2016).

The approximately four-yearly Hertford Civic Society Awards celebrate the commissioning of good architecture in Hertford and encourages others to think about what constitutes good design and show what it is possible to achieve in a range of different building types. 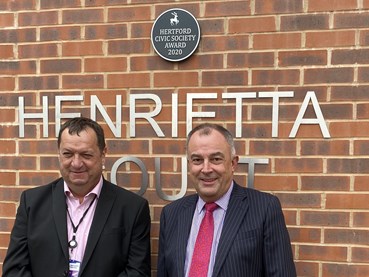 The unveiling had been delayed due to the pandemic, so it was really pleasing to finally be able to commemorate these projects, particularly the transformation of the Ridgeway which was completed in 2019.

The old Ridgeway, a former council estate on the edge of Hertford was a poor-quality 1960s development. Homes were mouldy, dark and hard to heat. Communal spaces lacked a sense of ownership with poorly defined public areas and badly designed routes through the estate. It was decided that a complete rebuild was what was required.

With funding from East Herts Council and Homes England (the first for a regeneration scheme) we dramatically remodelled the estate creating a new neighbourhood of streets with 134 new homes designed for modern living. This new Ridgeway is 100% affordable with 57 one, two and three-bedroom homes available through Shared Ownership and 77 for Affordable Rent. These are a mixture of apartments and family sized houses.

Engagement was key with this regeneration and we wanted to ensure local residents were consulted throughout. A specialist team from Network based on site ensured that good working relationships with tenants were established. This was while the team acquired in-depth understanding of the old buildings and learnt about and engaged with wider neighbourhood issues, including falling school numbers, anti-social behaviour, retail and recreational amenities. 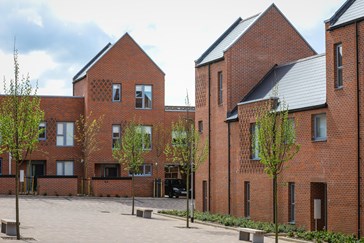 Ninety per cent of residents fed back in detailed consultation on the initial plans and 88% of those were pro-demolition. This overwhelming support for the regeneration helped consolidate the commitment of funding bodies and East Herts Council, so that the project took just over five years from feasibility through design, planning, decant, and demolition to completion. All residents were rehoused locally with the right to return at completion of the scheme.

Compared to the cramped flats of old, the newer homes offer generous outside space, be it individual balconies, top floor roof terraces overlooking the Hertfordshire countryside or courtyard style gardens.

New streets were created and what was once wasteland was incorporated into the design to utilise the space for the benefit of residents. There is direct access out into the Hertfordshire countryside. We celebrated the heritage of the area with streets and buildings named after the wives of the Earls of Cowper at the nearby former country house of Panshanger. Humphrey Repton, the landscape architect of Panshanger Park is also commemorated.

The final part of the Ridgeway jigsaw was the refurbishment of Anna Court (formally Colebrooke Court) which was completed in June. This was a block built in the 1990s which has been transformed into five spacious homes for shared ownership and six for affordable rent.

In 2019 we made a short film about the Ridegway project. You can view it below.