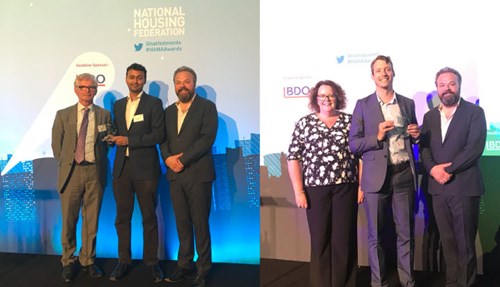 The best newcomer award recognises a finance team member who’s in the early stages of his/her career in the sector and shows promising application, enthusiasm and aptitude for a career in finance. Meanwhile, the Finance Director of the Year award honours an exceptional finance director who leads a high performing team and makes a critical difference between good and outstanding service.

The HANA Awards are the number one awards event in social housing finance. This was a great opportunity to showcase the fantastic work of our finance team which was benchmarked against other top housing finance professionals.

This latest accolade follows a great year of awards success for Network Homes including two award wins for our South Kilburn regeneration scheme at the RESI Awards and Evening Standard New Homes Awards. In May, we celebrated two more award wins at the National Safety Awards 2018.

I’m delighted to have won this award, which is in recognition of my finance directorate, as I wouldn’t have achieved this result without their hard work and fantastic support.