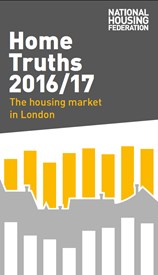 House prices have become so expensive in the capital that buyers hoping to save for a typical deposit over the next four years will need to scrape together at least a staggering £2,300 every month, a new report from the National Housing Federation reveals today.

According to the London Home Truths 2016/17 report, a 20% deposit on an average house in the capital has now soared to around £113,000 – putting home ownership completely beyond reach for the many desperate to step foot on the property ladder.

Despite having the highest average salary in the country (£34,000), earnings in the capital have failed to keep up with the merciless increases in house prices. The average London house price (£563,041) is now double the national average and an unprecedented 16.6 times more than the typical salary.

This means that a household currently needs an income of almost £130,000 a year to afford an average mortgage at 80% of the value of a typical house.

The report paints an equally bleak picture for private renters, too, as the average monthly rent (£1,727) now swallows an eye-watering 61% of a typical salary.

But having a job in the capital is not always enough for some, with more and more working people in London turning to benefits to help make ends meet.

Over a third of all Housing Benefit claimants in London are in work, higher than any other region in England, highlighting the desperate challenge of meeting the costs of skyrocketing rents and house prices.

The housing association sector is working to battle the capital’s housing crisis, completing over 11,000 new homes during 2015/16. This was nearly half of all new homes in London for that period.

“The London Home Truths 2016/17 report highlights the housing crisis in London, showing the lack of affordable homes being built. We are committed to making a difference by building 1,000 homes a year for social and affordable rent, and shared ownership.  We work on the principle that we can and must do everything possible to help solve the housing crisis.”

You can download and read the Home Truths 2016/17 report here or alternatively for more information visit: www.housing.org.uk.