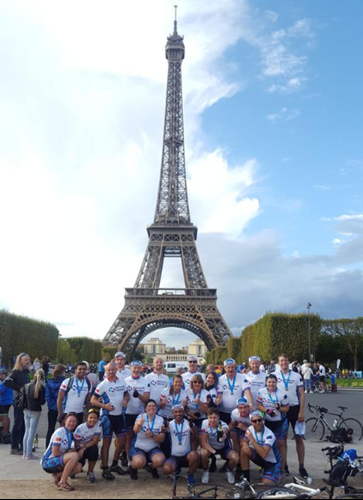 Twenty cyclists from London and Hertford based housing association, Network Homes, completed a 300 miles bike ride from London to Paris on Saturday, raising £66,000 for homelessness charity, St Mungo’s - the highest ever amount raised for St Mungo’s during a challenge!

Throughout the hilly four day journey, the cyclists climbed around 4,300 metres – the equivalent of scaling Mount Snowdon every day for four days. On the final day, the cyclists rode in convoy through the streets of Paris, including navigating the notorious Arc de Triomphe roundabout, to the finish line at the Eiffel Tower and were cheered on by the public who saw them riding past.

St Mungo’s is a charity working directly every day with people who are sleeping rough, in hostels and at risk of homelessness in London and South England. Network Homes’ staff chose St Mungo’s as the company’s Charity of the Year.

According to CHAIN, in 2016 more than 8,000 people slept rough in London over the course of the year but this figure does not include less visible forms of homelessness such as sofa surfing or people living in hostels. There are also 54,000 homeless households in London in temporary accommodation. According to St Mungo’s 92% of clients have complex needs and 73% have mental health issues.

I loved the riding and getting to know my colleagues better! This is an epic achievement from our cyclists and we’ve raised a lot of money for St Mungo’s. We believe in the value of services they provide to end homelessness and supporting people through some tough times to rebuild their lives.

Helen Evans, Chief Executive of Network Homes said: “We’re proud to be supporting St Mungo’s in their aim of ending homelessness and rebuilding lives. We believe good homes make everything possible and having a safe, secure place to call home helps to create stability in employment, mental health and wellbeing. We work to provide affordable housing for people in London and the South East.”

Robert Neale, Corporate Partnership Executive at St Mungo’s said: “Network Homes have put so much energy behind our partnership, it’s incredible to see their efforts culminate in such a successful challenge. We would like to thank everyone who made this possible – from the cyclists and their supporters, to the event organisers and companies sponsoring the Network Homes team.”

Donations can be made at https://www.justgiving.com/fundraising/networkhomes.